Sticks, Self-Realization and The Queen

When you’ve been chasing down the big stories as long as I have, preparedness becomes like a sixth sense. I could, hypothetically, be in Cancun one morning and catching a red-eye to Patagonia the next. It turns out there are amazing dogs everywhere and they’re not going to interview themselves, so I have to be ready for anything. I keep my duffle packed with the basics for hitting the tropics and/or scaling icy cliffs. Chap-stick is crucial. Last weekend I was lounging in my kiddy pool, wondering why southern California had one season instead of four, when the phone rang with my next assignment. I was dried off and ready to hit the road before you could say, “Adios Roberto.”

My destination: Toronto, Canada to meet up with @deanthebasset! I was excited about heading that far north and 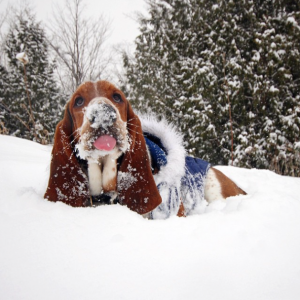 getting to meet a real live basset hound. I grabbed my notepad and pen, a giant stick from the yard, one bottle of 100% pure maple syrup and headed to the airport. The trip amounted to a mediocre snooze””a quick five and a half hours””which I jotted down for future reference. The whereabouts of our meeting was remote, but I punched “tree stumps near Dean’s house, Canada” into my GPS and made it there without a hitch. As I trudged through snow as deep as I am tall, I checked my watch; 11:30, I was right on time.

Dean was waiting outside in a puffy feather-down vest with a fur-lined hood and nothing else. He always has such cool style. Beside him was a giant mug containing something that smelled equal parts bacon, peanut butter and coffee. I decided not to ask if his mother was aware of what he had for lunch””had to play it cool. I suddenly felt a wave of nerves creep up, Dean was the first basset hound I’d ever had the pleasure of meeting face to face. Basset hounds are my heroes. So many questions.

I shoved the nerves aside as we sniffed hellos. There was work to do.

Bogie: Dean, Buddy, this is fantastic. You are what I, and many dogs everywhere, only dream of being: you’re a basset hound!  Can we talk about that for a minute? Like basically how did you decide to become one?

Dean: I was directionless, in a tailspin, barking up all the wrong trees, searching for answers at the bottom of a bowl. I couldn’t admit I had a problem.  My friends and family wanted to help me but I wouldn’t listen. In anger, I chased them away like so many squirrels. Then one day, I realized, they weren’t coming around anymore. I finally woke up and said to myself: “There must be more to life than this.”  I wanted to be all I could be. That day, I decided to become a basset hound and I’ve never looked back.

Bogie: That’s so awesome buddy. Yeah, sometimes the path to self-realization can be kinda unfun. Personally, I’ve always said that when I grow up, I would very much like to be a basset. Do you have any advice for dogs like me?

Bogie: Noted. Your ears. I mean, the amount of buzz they generate (not in the sonic sense) is staggering.  Men and woman, on a global level, go nuts over them! Would you say they are your biggest asset?

Dean: Actually Bogie, my biggest asset is my mind. Did you know that approximately 30% of the world’s land area (15 million square miles) is covered in a form of stick-producing organism called “trees”? 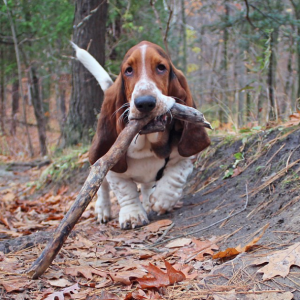 Bogie: Woah, move over Einstein. Dean, honestly, I have no idea what you just said except for the part about sticks. I love sticks. Moving right along, what size paw do you wear?

Dean: All my gloves are custom-fitted for my high-performance lifestyle”¦ but my snowshoes are a size 10.

Bogie: I didn’t even know they made snowshoes that big. I just figured XL was for Great Danes. Many know you’re a guy who enjoys the cold and that’s a good thing considering you live here in Canada, but are you a citizen? What’s your background?

As all Canadians know though, you’re not really a citizen until you complete the mandatory Canadian rite of passage of finding a moose in the wild then riding on it’s back through a Tim Horton’s drive-thru. I plan to complete this when my family and I visit Algonquin Park this May.

Bogie: Go Toronto Maple Leafs! You’re just a kid, but your future is bright. If you were to guess where you’d be in a year (or seven) what would you say?

Dean: I’m pretty sure you’ll find me on the couch.

Bogie: Dreams do come true! Keep up the good work Bro. Now I know it’s almost lunch time, but do you think we can squeeze in a quick lightening round?

Bogie: BC or Quebec? 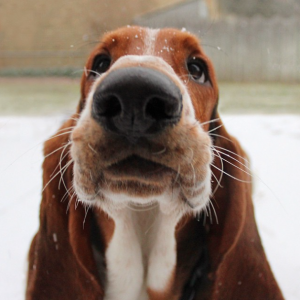 Dean: Which one has more cheese?

Dean: They are the Yin and the Yang, opposite or contrary forces that are actually complementary, true happiness can be achieved when the two are in perfect balance.

Dean: It’s all about the thrill of the chase!

Bogie: Coffee or tea? (or are you too young for caffeine? )

Dean: Coffee.  But if the Queen of England starts following my account she’s welcome to swing by for afternoon tea and I’ll steep a pot.  Ya heard it here first! 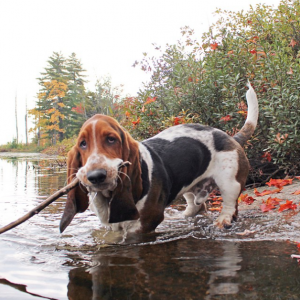 Dean: They go hand in hand.

Dean: Mom handles all my correspondence.

Bogie: That must be a Canadian dude.  (note: google “Dean Murdoch” on the plane ride home)