What About Reverend Bob?

I definitely believe in Dog but I don’t necessarily adhere to any one religious philosophy. That doesn’t 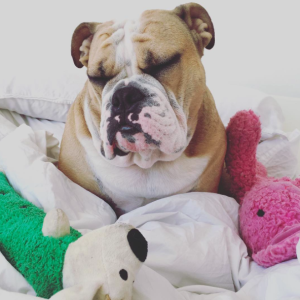 stop the ginger from trying and, after I was (supposedly) rude to José the Gardener last week, she thought a good dose of #catholicguilt would set me straight. When she switched off my Sunday morning cartoons and slipped a red bowtie around my neck I knew I was in for it. “We’re going to Church Bogie,” she said, “I hope this will help you gain some clarity on the José situation.”

Look guys, I did nothing wrong. He left one of “his” garden hoses in my yard and I destroyed it. End of story. But I could tell from her tone that I had no say in the matter. As she slipped on my navy cardigan, I slipped my notepad and a somewhat dull pencil into my duffle. Then I texted my dad to make sure he knew about this—a Jewish street kid from the southside of Chicago would totally be in my corner, right? No response. He’d pay for that later. 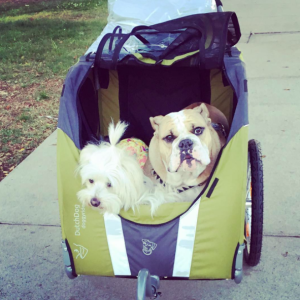 In a last ditch effort to find a “prior engagement,” I called my boss and asked him if he had any last minute errands he needed to run: “Coffee? Bacon? A story?”—with as much fake enthusiasm as I could muster, I made it clear I could be persuaded to work on a sunny Sunday morning.

“I’m afraid your mom already called me, Bogart. There’s no getting out of this one,” he said. “But as long as you’re on your paws and knees asking Dog for forgiveness, would you mind having a word with Reverend Bob?”

I agreed and jotted down the assignment in my notepad as we drove, in silence, to Church of the Good Shepherd in Beverly Hills.

I don’t remember much of the sermon, but I’m sure it would have made me feel a little sad about the way 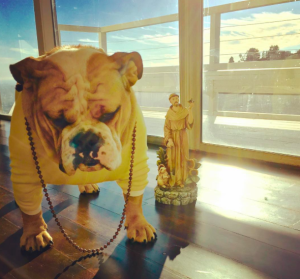 I treated Jose. As we said “Amen” I caught a glimpse of a larger than life bulldog up on the altar. He needed no introduction. As the masses made their way for the door, I waddled right up to Bob, whipped out my notepad and asked him if he wouldn’t mind answering a few questions.

Bogie: Nice work back there Reverend, very moving. Your name is Bob Is Cray. Tell me, is that because you’re crazy?

Bob: First off, what up BogieVonBogue? I’d party with you. And hello to all my fans.

I will now address my name. Using your logic everyone must also think @fuckjerry is constantly getting…well, you know. But in my case you just might be right. I’m way cray. But cray is the way. When humans don’t understand, they call it crazy… but often it’s too brilliant and 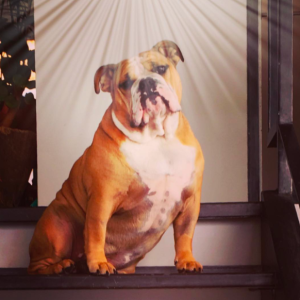 beyond their comprehension. You dog it? I’m a genius.

And so it’s true that my current physical manifestation is that of a bulldog, but I am also the energetic manifestation of THE BOBs—a group of highly evolved masters ready to wow your woof. You’ve been asking for me Bogie. Here. I. AM. Next!

Bogie: I’m wowed alright! And I never understood why a guy named Elliot Tebele would want to do that with a guy named Jerry. Furthermore, how he could have 7.7 million followers??? Anyway, moving right along…your accent sounds as if you’re from the Hollywood Hills. Born and raised?

Bob: You’re good. I was reincarnated in Santa Barbara. My human mother breeder was African American. My human breeder father was Asian. So I like all breeds—I’m a multibreedinal. Look it up. At 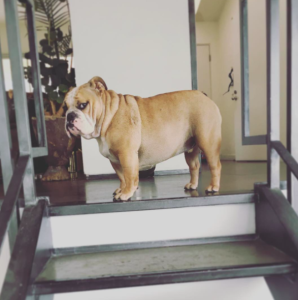 8 weeks I was picked up by Beyoncé (my pet name for Samantha Stephens, which is my pet-pet name for my person) and we live in the Hollywood Hills in a house that would be perfect for a Bret Easton Ellis drug scene.

Bob: I’m the shadow of Mack the Wizard. He’s yin. I’m yang. It’s a team effort, Buddy. He’s a Coton de Tulear and a master of everything. I execute. I’m very stealth.

Bogie: Stealth yang execution sounds tough. Do you have time to go on walks? How do you get everything done in a day? Please, for the love of Dog, tell me you have a driver?

Bob: Oh Bogie, hell naw. I am not stuck in the humanic barrier of limitations. I live in the vibration of 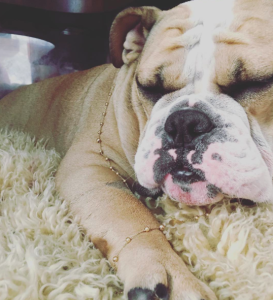 infinite power. I am, and can and will do it all. LIKE BOOM. I’m Bob and I’m tuned into the infinite powers of Bob. Bogie, between you and me and the world, life is awesome.

Bogie: Dude, now that you mention it, life is pretty rad most of the time. Ok, the next question is hypothetical. If all of the sudden you experienced an anthro-transformation…what human, historically or alive today, would you most resemble? Like, who is your non-dog doppelgänger?

Bob: God. For sure. Other than that: Jesus. With a sprinkle of Cleopatra Marlon Brando…meets a Jason Bateman/Ricky Schroeder/Holden Caulfield morph.

Bogie: That makes sense. Let’s get back to your #boblestudy group for a second. For those lackadaisical believers and/or non-believers out there…tell us your story and why should we come to #believe?

Bob: To believe is to have faith. I am Bob. I am a conduit to love and light and so much food it’s insane dude. I am a working dog, a family guy and a spirit animal. I battle darkness with a Woof. If I want something, I get it. I will it. I have answerz, #immabulldogbitch—I use my Gladiator energy to heel the masses. I’m heeling you as we speak.

Bogie: You are? How’d you know about the allergy in my left paw? It still itches, but maybe it will stop after the interview is over?? So tell me, it’s Sunday morning— what’s your before Church routine?

Bob: I’ll have some whine. Maybe a little pawt. Then I’ll meditate to Too$hort and see where the Spirit moves me. 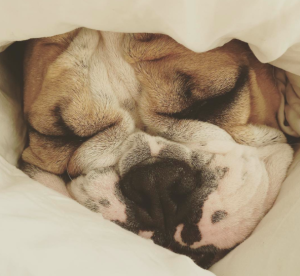 Bogie: Bob, you never cease to surprise me. It’s almost time for coffee and doughnuts so let’s have a quick lightening round: Barney’s or Niemen’s?

Bob: The demographic at Niemen’s is much more emotionally reserved. I prefer the Barney’s fans.

Bob: Holly Woods and I are good friends and if she was checked in anywhere it was due to exhaustion. That tequila they were claiming was really only water and that “wine” was grape juice. Next.

Bob: The shark suit brings me a lot of positive vibrations but I AM. Naked. Final answer.

Bogie: Peace! be with you.