A Rasher of Insights from Francis Bacon

It happened suddenly. I was getting coffee in Echo Park — slurping up my whole milk puppicino with whip — and in 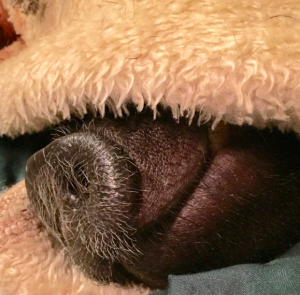 walks Francis Bacon. Star struck, I fumbled nervously around my duffle for my notepad and pencil. This might be the greatest story of my career I thought, as I wiped off most of my milk mustache.

I took a deep breath and walked right up to the famous pig.

Bogie: It’s a great honor and a real pleasure to meet you Mr. Bacon. May I ask if you’re named after the famous artist or the barbaric foodstuff?

Francis: The pleasure is mine Bogie! May I first just say that I believe Bacon is a state of mind, not a food. Often people think I’m named after SIR Francis Bacon, the philosopher, and although I’ve been known to partake in the occasional friendly philosophical debate, it’s the artist who’s my true namesake. 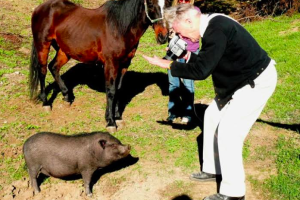 Bogie: Do you appreciate your person’s droll sense of humor in this (naming) regard? And does she eat bacon?

Francis: I never really understood the humor to be honest. My brother Kevin has a better sense of humor than I do though; maybe you should ask him.

My human only eats facon!

Bogie: Is that similar to tofurkey? Gross. But that’s probably a relief for you. Speaking of food, and not to digress too much, I was wondering if you have any interest going into the truffle 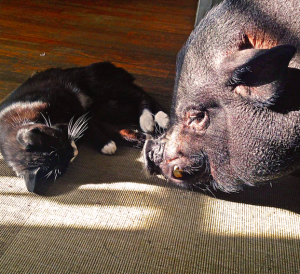 sniffing business with me? Equal partners—between my restaurant experience and your nose, it could be pretty lucrative and/or delicious. We’re both foodies after all…

Francis: Have your people talk to mine… I can’t guarantee I won’t just eat the truffles I sniff out.

Bogie: But wait, are you vegan?

Francis: I eat nothing with a face!

Bogie: Uh oh, now that you mention it, I don’t think I eat anything without a face. True to your name, you’re an artist and a fine one at that. What medium do you work with/in? And is that your full time job? Any 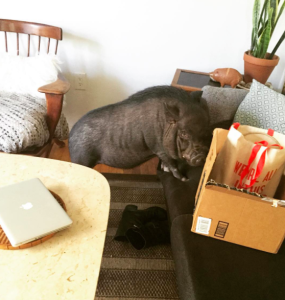 Francis: You’re really too kind. Many of my early critics classified me as a destructivist, and more recently a post-post-modern abstract expressionist. I just think of myself as a simple pig who puts his pants on two legs at a time like everyone else.

I do enjoy experimenting with materials accessible to me; I love to work in dirt, raw produce, deconstructed furniture, altered interior design, and occasionally urine on carpet… really my mood determines the outcome of my work.

Besides my art career, I’ve been known to moonlight around Hollywood. Not to name drop, but I was once photographed by David Lynch.

Bogie: Woah, name drop all you want. I’m getting more impressed by the moment! Once I tried to tell my mom that 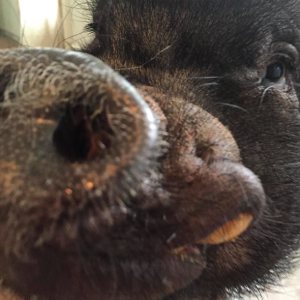 urine on a white sofa wasn’t unlike some of Jackson Pollock’s work. I was grounded for a week. Having said that I was just reading that experts say pigs are even more highly trainable than dogs. Do you find this encouraging or discouraging?

Francis: I don’t know much about dogs and their trainability, but I actually find humans the most trainable of all! Most recently I trained my humans to escort me outside with an umbrella when it rains. (snort laughs loudly)

Bogie: Would you mind taking my readers through a day in the life of you?

Francis: Surely! First off, might I say, I’m a creature of habit and love a routine. I wake up every morning at 8am and start my day off with a workout. Usually this consists of rearranging my living room furniture loudly while waiting patiently for my humans to wake up and feed me breakfast. After breakfast, I like to spend some 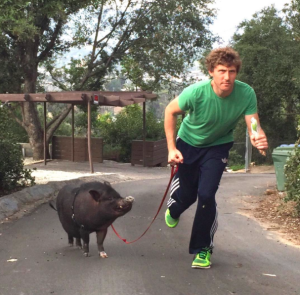 quality time in my water bowl blowing bubbles for at least an hour until I take my first bathroom break. My bladder is gigantic and one pee can take up to five minutes! Imagine how outstanding my rug works of art turn out!

Then phase two of my day begins: Art making. Until dinner at 5pm, I work diligently on my craft. On nice days this generally takes place in my yard and consists of performative rooting and dirt sculpting. On chilly days (really anything under 75˚) I work inside.

My humans serve me dinner every day at 5pm. A few minutes late, and it’s back to rearranging furniture! I can’t read a clock but I always know the time.
After dinner and social hour, I begin the process of making my bed. Some would call me neurotic, but they just don’t understand the importance of a properly made bed. When my bed is really unkempt, it can take me up to 2 hours to get things just so. Don’t ask… It’s 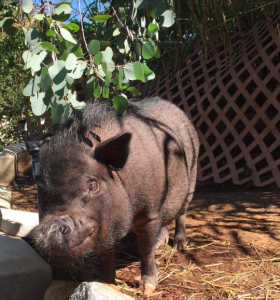 just the way it has to be.

Bogie: I’m exhausted just hearing about your day. And to think I thought I was busy as a gardener, blogger and human trainer! I understand about obsessive-compulsive bed making disorder (OCBMD). I think my father suffers from it. Speaking of family, do you have any biological or adoptive siblings?

Francis: I was born on a farm and there were 5 of us, but I knew from an early age that farm life was no place for this pig. I hopped a plane from Sacramento to LAX and now I live with my adoptive sister, Kitty Sanchez, which I imagine you’ll guess is a cat. Oh Kitty…We pretty much just coexist. Sometimes we share a sunspot or a butt sniff, but that’s about it. 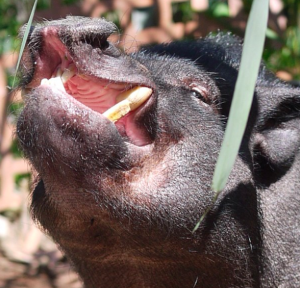 dunno. They smell funny. Actually I’m almost never scared expect on trash day, vacuuming day, gardening day and on… well, never mind. Is it true that a frightened pig’s scream can measure 115 decibels? (That’s two more than a jet taking off for those who were wondering.) What do your neighbors say when you get scared?

Francis: AHHHHHHHHH!!! HELPHELPHELP!!!!! SAVE ME SOMEBODY FOR THE LOVE OF DOG HELP ME AHHHHHHHH!!!!

Oh, Ehhem…Pardon me… Sorry, I thought you said vacuum!

As far as the squealing, only a terribly unrefined pig would squeal so loud that their vet wears protective ear gear during routine hoof trimming….or so loud that neighbors from down the street 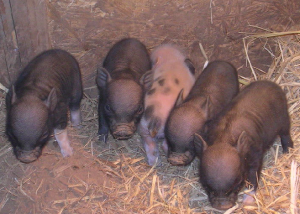 come running to the rescue in their socks.

We’re obviously not talking about me here.

Bogie: Obviously not. Do pigs drool?

Francis: No way. We drip!

Bogie: You’re tan, but do you need to ever wear sunscreen?

Francis: Ugh… Yes. And being sun screened is the absolute worst thing in 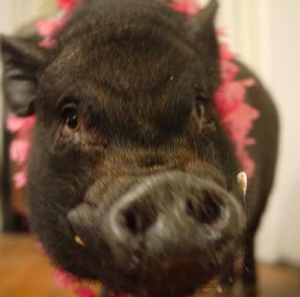 the entire world. I find any moisture on my skin unbearable.

Francis: As a city pig, I relate to both: The one in the city and the one who took Manhattan.

Francis: Whatever falls on the floor first!

Francis: Sunshine always! I’m a SoCal pig for sure! 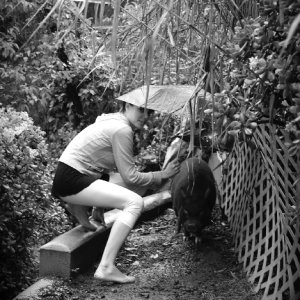 Francis: Charlotte! Wilbur was Some Pig!

Francis: Physics! I love when the apple falls from the tree.

Francis: Ahhh that reminds me of a great joke: 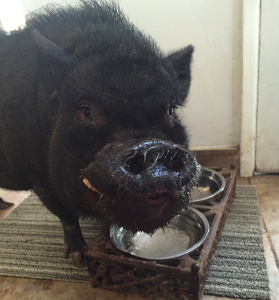 Q: A keyboard player and a guitarist fall out of a window… who hits the ground first?

Francis: Now that we’ve gotten to know one another, Bogie, you can call me Frank.

Bogie: One last thing Frank, is there anything you’d like to say to folks out there considering adopting a gentlemen such as yourself?

Francis: Thanks Boges, that’s important. There is a lot of misinformation out there regarding pigs as pets and the last thing I want to do is encourage anyone to get a pig as a pet without having the right information. The number of “pet” pigs who get euthanized or abandoned every year is staggering (and this has a lot to do with the popular misconception that there is such a thing as a “mini pig”).

But here is a good article for those who’d like to learn more.