I’ve always wanted to go to London. Not for the “food” or the crumby weather, but to see where I came from—to meet some real British bulldogs and take a ride on the top part of a double-decker. Nelson, a Frenchie who happens to live across the channel from France, is a good friend of mine. So when I got my latest assignment: Interview Nelson, I was stoked. Before I packed my duffle, I dug out an old Lonely Planet and made a list of all the places I wanted to check out. Big Ben and Buckingham Palace were on it (of course) but I’d also heard about some great smells in Piccadilly Circus. Westminster Abby and the Tube made the cut as well. Truth is, I could hardly wait to mind the gap.

Because first impressions are extremely important, I packed a navy suit, some brown oxford shoes and a turtleneck sweater. Springtime in London can be

unpredictable. I tossed in some American treats for Nelson, my notepad, two pencils and a pair of galoshes just in case.

As luck would have it, British Airways upgraded me to First Class…something about me being “good for their image.” In hindsight, I wish I had taken advantage of all the freebies on that 11-hour flight, but I passed out as soon as the flight attendant helped buckle my seatbelt. It’s a reflex.

Finding Hyde Park wasn’t difficult at all. My instructions were clear: meet by the boathouses at 1:45 p.m. I looked down at my watch, realized I had a few minutes to spare and picked a spot in the sun. I had just started to relax when a slew of messages began flooding my phone. It was the office warning me that my plans had changed. I was told to remain calm but to be advised that Nelson was on house arrest. Beyond that, details were foggy. Apparently, his cousin would be coming in his place. Jolly good, I thought. But then my boss called and stammered out, “the thing is…and don’t be alarmed…it’s just that…and remember you’re a professional…what I’m trying to say is…he’s a poodle.”

What happened next I can’t really say. I must have passed out because moments later a very large poof ball was inquiring as to “whether or not I might be the bulldog from America named Bogart.” His accent was thick, like a mix between the way Christian Bale really talks and Jude Law. This was going to be interesting.

I sat up and tried to blame my standoffishness on jetlag. An obvious lie. My legs were still wobbling when I confirmed my identity, but I tried to play it cool. Poodles, as many of my readers know, are my kryptonite.

Bogie: This is a little uncomfortable. My boss told me I was going to London to interview a Frenchie named Nelson, but instead it’s you and you’re a poodle. Do you know anything about this mix-up? Nice to meet you and whatnot. Where’s Nelson?

Marcel: Nelson Schnelson! Oh you mean my cousin, the ‘hobgoblin’—just a little playful nickname, though no need for him to know that’s what we call him. Ssssshhhh! My understanding is he’s currently awaiting trial on charges of reckless property damage, intimidation and breaching the peace (namely systematically destroying every soccer ball within a 150 acre park in the space of one hour). So yes, he’s my cousin but not by breed.

Bogie: I understand you call soccer balls footballs. That’s ridiculous. Anyway, I’m sure Nelson’s people will see to it that he gets off easy. Poor bloke. Back to you Marcel and your French sounding name. Are you from Paris? Tell me a little bit about your background.

Marcel: Well, I do exude a certain je ne sais quoi and I’m very much more a lover than a fighter. But in fact, poodles have their origins in Germany and Russia where we were used as hunting dogs and for retrieving waterfowl. The name “poodle” comes from pudeln in German—meaning to splash about or paddle. The French bred us smaller and toy poodles were introduced as pampered favourites during the reign of Louis XVI. I think coiffure was invented for us. I’m still waiting for a sponsorship deal from L’Oréal.

Bogie: Such history! I had no idea. All this time I thought you guys originated in Beverly Hills. Thanks for clearing that up. So, what do you do for a living here in London?

Marcel: I’m very much a man poodle. I work out in the morning. I pride myself on my muscular physique. Protein shakes, tricep dips, sprinting, cross country hikes, Iron Man, Tough Mudder, it’s all in me. But hey, I can be metrosexual too: last season I totally rocked the 80s leg warmer vibe although they were too impractical with our rainy climate and my rigorous outdoors lifestyle. Grooming is part of my life. If I don’t look good, you don’t look good.

Bogie: Wow, I have to say this workout regime of yours sounds simply exhausting, impressive and terrifying all at once! Well, this is a little off topic, but there is this neighborhood poodle where I live and he is very vocal about his dislike for me when, in fact, I’ve done nothing but be polite when walking by. I don’t even dare sniff his grass. What do you think his beef is with me?

Marcel: Hmmm, is it LA poodles? My dad once told a bunch of drunk girls that I was a rescue ‘fighting poodle from LA.’—they totally bought his story that poodles are used as fighting dogs by gangs in the Crenshaw district. Maybe it wasn’t so far-fetched? Are my transatlantic cousins aggressive? Is it the vanity culture? I think he’s

just envious of your hang- loose, low maintenance good looks. My philosophy is that aggression is the first sign of love, but I’ll leave that with you. Embrace your inner poodle.

Bogie: That will never happen. #sorrynotsorry. Do all poodles strut instead of walk?

Bogie: Whoa, Marcel, you’re far more awesome than I ever could have imagined. I mean, I’m not saying I’m all of a sudden pro-poodle, BUT if we were to be at the same party, I’d definitely want to hang. I know you have a spa appointment in a little, but would you mind if we did a quick lightening round?

Marcel: Fantastic. You are so much more fun than the English bullies over here. It must be your yoga and love of gardening. Yes, the spa is part of my life. I’ve been groomed to be the best… so my hair has got to look pretty good as well.

Bogie: Blow out or air dry?

Marcel: Beagles – you’re the exception to the rule!

Marcel: Does Lyft involve an actual lift into the vehicle? I steadfastly refuse to jump or climb into an automobile of any kind. My humans do this for me (Human Training 101!!), some grunting ensues as I’m 28kgs (that’s 62lbs to you).

Marcel: V-neck, with a cravat – why not? 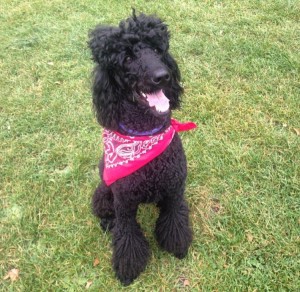 Bogie: Made to measure or bespoke?

Marcel: Bespoke. Caraceni to be specific.

Bogie: Of course you are! Well Sir Marcel, thank you for being my exception to my Poodle rule. You’re a really are a cool dude and I might have to rethink some stuff. Now, how about a ride on a double decker?

About the Author: Marcel Poodle