It was 2:30 on Monday afternoon. I was at home YouTube stalking my #mancrush Tillman because, with summer just around the corner, I’ve decided I’d like to become a professional surfer. I was taking an online certification course while watching footage of my future buddy hitting the waves. I jotted down notes as Tillman

wakeboarded his way across the sand with ease. One day, I thought…one day.

Just as I was learning how to wipe out in style my boss called. He said he had a lead on a New York farmer turned respected Alabama Veterinarian and that I needed to get on the first flight to Auburn out of Los Angeles. Particulars would be faxed within the hour. That meant no time for my afternoon nap—I had to pack.

I pulled out my duffle and tossed in a couple flannel shirts, a visor, my compass, two pencils (freshly sharpened) and my favorite book on Armadillos. I tucked my notepad in the inside pocket of my jean jacket and was brushing my teeth when I got another urgent text from the office: Bring Kraft American Singles.

The flight was a breeze, I read the whole cover of Surfer Magazine and then snoozed the rest of the way there. My GPS had me headed straight for a trailer park near Auburn University where I was about to meet Dr. Sir Watson Charles.  The length of his name had me a little nervous, but I tried to relax. I remembered that I’ve always wanted to live in a trailer park.  I love trailers and I love parks.  A winning combo if you ask me. 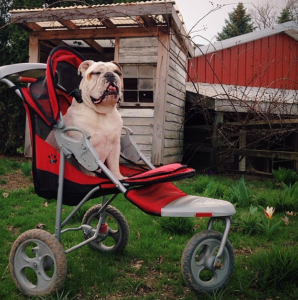 I pulled up the dirt driveway and parked next to the fence. I looked down at my watch: 12:28 pm. I was right on time. The air was thick. I wiped my nose wrinkle and slipped the visor over my ears. That’s when I saw Dr. W (as his peers call him) rolling down the drive in a bright red stroller. His mother was doing a fine job pushing him along. She looked cool. So did he. He was wearing nothing but an old matching red banana around his neck…it worked.  Simple, understated yet sophisticated. I liked it. He instructed his mother to wheel him to the grassy part of his trailer park where I assumed he’d dismount and so we could peruse the grounds as we talked. But no. Dr. W stated he would not be descending from his stroller at that time. Who am I to argue with one of the finest veterinarians in the country? So I walked along side his transport as his beautiful mother pushed him along. Wow, I thought, she is so well trained. This guy has it all.

Bogie:  I think I read somewhere that you were raised in a small town in upstate New York.  How did you get all the way down here?

Dr. W: Bogie you know the ‘ole ball and chain saying? Well … the leash and collar saying means the same thing. Momma was headed south and I am attached to momma.

Bogie:  Wow, that must have been quite a transition.  But, of course, all for the good of your practice. What has been the most challenging part about the move for you? 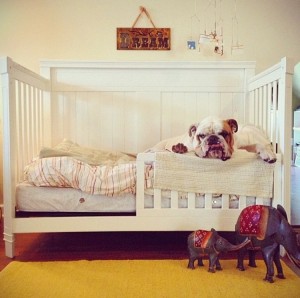 Dr. W: Cockroaches. The things are the size of turkey vultures in the south. I heard one of the locals refer to them as the state bird of Alabama. EW.

Bogie:  How do they taste?  Can we try to catch one before I go? Vet school must have been tough. I know of very few, if any, bulldogs who managed to complete the grueling exams and hours in the lab.  How’d you do it?

Dr. W: Naps. You know that we bulldogs can take a solid nap anytime and anywhere. The key is just to be careful where ya nap in vet school. You don’t want to be confused for a dissection cadaver or a pre-op neuter patient.

Bogie:  There’s a nightmare!  And yet you always managed to stay so calm.  Just last year I heard your person adopted another bulldog—adding to an already full double-wide.  Was this a challenge for you in the midst of your practice?

Dr. W: Ahhh yes, BamBam. At first, I was all like who the heck is that guy and why is he speaking Spanish? (his previous owners were from Puerto Rico ) My mom has to give all commands in Spanish. #Humantraining101 just got a whole lot more interesting. I have to say though, I’ve grown quite fond of the dude. He’s younger and more flexible than I so together we can conquer a lot. Tipping over the garbage 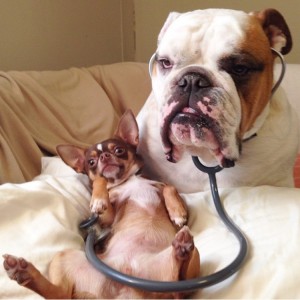 and getting dinner plates off of the table is a snap.

Bogie:  Dude!  I didn’t know BamBam solemente habla espanol.  Talk about a diverse family.  Is it true that your sister is a…um…no offense, a Chihuahua?  I mean, they aren’t all as bad as they sound.  I have two in my family.  Cousins.  Pete and Tina.  They’re pretty alright.

Dr. W:  Pretty alright is a stretch. She is a complete diva and goes around telling everyone that she has her pH-Chi in The Princess Sciences.  I just ignore her and let her think she’s always right. #womenproblems

Bogie:  Wow, she sounds otherworldly. Let’s talk about the crib your mom bought you back when you were a farmer in New York.  That’s some valuable real estate property for sure.  What happened to it when you moved?  Are you renting it out? Is it on Air B&B?

Dr. W:  It was a human training tactic for sure.  They simply won’t make you sleep in a crate if you put up a big stinky fuss.  So Momma El invested in a Stork Craft pearl white convertible crib.  BSNE! (#bestnightsleepever) So, for now, the crib chills at grandmas house as cribs often do. She assures me it will always be there when I go back to visit.  We will be taking it with us on our next big move adventure wherever that may be! 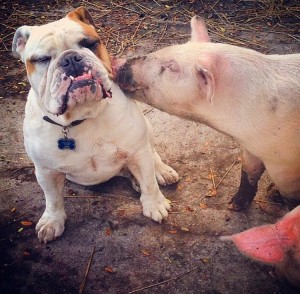 Bogie: Doc, do you have it in you for a speed round?  I won’t take up much more of your time.

Bogie:  Armadillo or Cow? (like, to hang with not eat)

Dr. W:  hmm… Armadillo, they are more my speed and height.

Dr. W:  Stroller, it’s as close to a convertible as I’ll get. 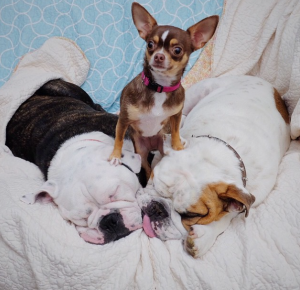 Dr. W: KRAFT AMERICAN SINGLES.  There is no choice there.