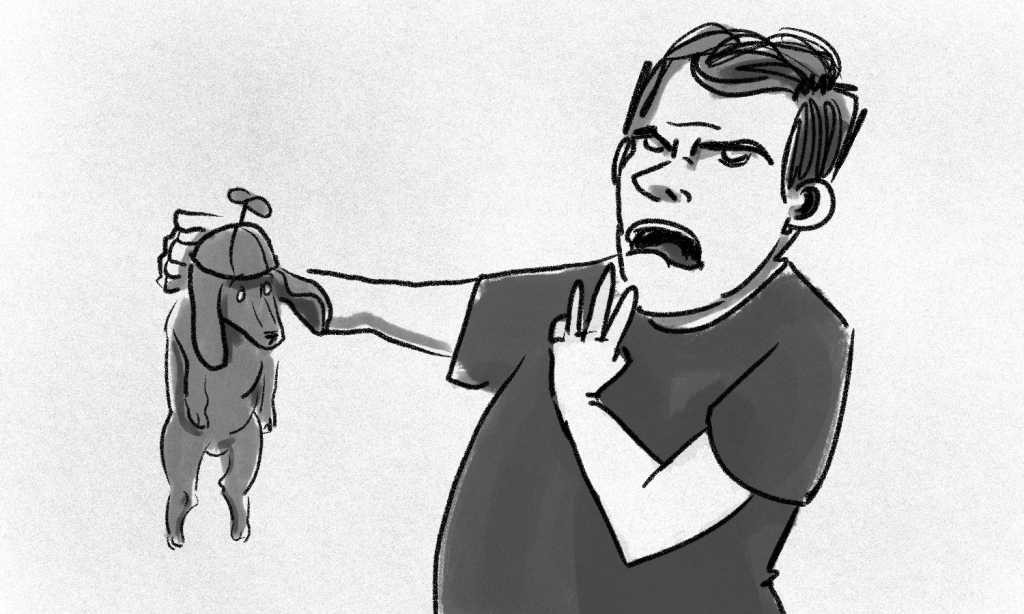 As I was saying, Sparky had been spending most of his afternoons on the loose. “I’m in love, Morty,” he’d explained. We had a perimeter to manage but I covered for him in the backyard while he did heaven-only-knows down the street at Sally’s house. Don’t get me started. I will say that his escape to capture ratio was impressive. For how many times he snuck out my pal only got caught by the scruff of his neck three times! Say what you want, the boy knows a thing or two about eluding the opposition. That third time, however, was the last straw. Sally’s owner was totally beside himself. He knocked on the Baxter’s front door with a very unhappy Sparky in his right hand and began shouting slanderous accusations and, for some reason, asking questions of a highly personal nature about my pal’s nether regions. The man seemed particularly interested in ascertaining whether or not Sparky had had a certain unfortunate but very important medical operation. Mrs. Baxter had to explain that while he had not, yet, it was not for lack of trying—repeatedly. Before you puppies get the wrong idea, the Baxter’s are the most responsible dog owners in Lake View Terrace and maybe the world and know full well that canine homelessness is a serious problem in this country. The thing is Sparky didn’t just casually not like veterinarians—he had what can only be described as an involuntary, extremely physical reaction to the very thought of seeing one. The degree to which he’d protest any interaction with medical professionals was legendary. On the rare occasion he allowed himself to be tricked or persuaded into their offices, my pal unleashed what can only be described as hell in the extreme. More often than not, furthermore, he managed to incite riot and rebellion in whatever other animals happened to be visiting the doc at the same time he was. His knack for this transcended species. The last time Mrs. Baxter took Sparky to the vet, for example, two cats, a potbelly pig, a Cockatoo with clipped wings, and an Iguana with a head cold somehow managed to persuade the doctor-on-call to go home early that day. Don’t get me started. “So you see,” Mrs. Baxter told the man, “his operation had to be postponed.”