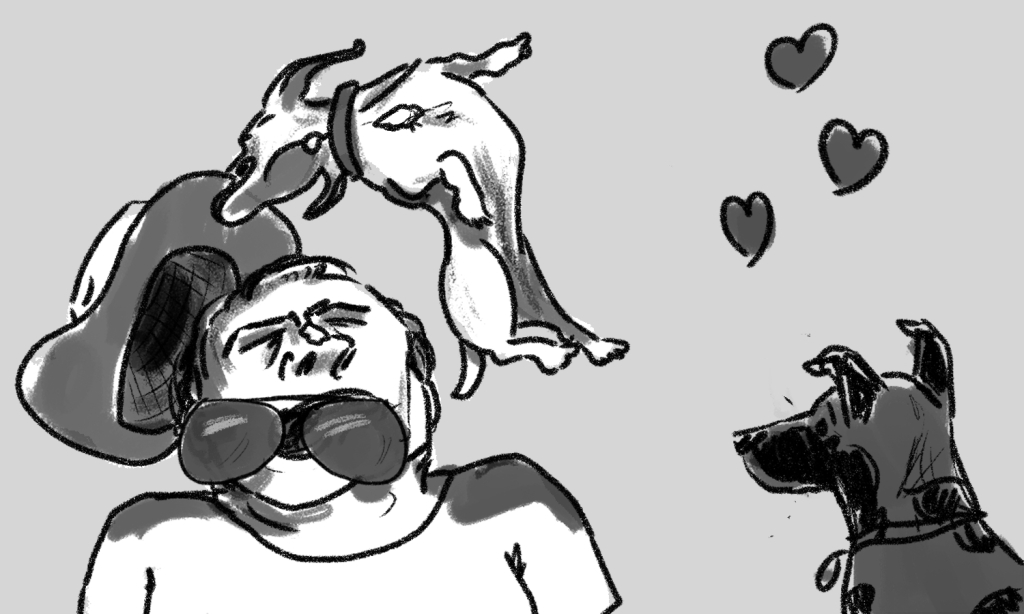 Most of the puppies at Mr. Sheeler’s Academy For Bad Dogs had been enrolled in an effort to address minor canine infractions—walking too fast when out and about, growling at strangers, answering nature’s call in a manner unbecoming, etc.—all stuff that for the most part could be chalked up to the same endemic lack of discipline and situational awareness I’d been protesting in Lake View Terrace for the better part of a decade. Peeing on the kitchen floor? Are you serious? For God’s sake, hold it in and bark. Don’t get me started. But Sparky and Sally were different. My neighbor Vern would later speculate that perhaps they “subconsciously bonded over the fact their attendance alone was court ordered and mandatory.” Whatever the reason, the attraction was mutual and immediate. Furthermore, it inspired in my pal a strong desire to impress Sally with the speed and physicality for which he was now notorious. Newsflash puppies: bitches are complicated. Within seconds of Mr. Scheeler employing his whistle to command the attention of his new recruits, Sparky lunged nearly six feet into the air—an altitude he’d later say could only be attributed to the propeller on his baseball cap—and managed to snatch the shocked disciplinarian’s full brim hat in his mouth while transitioning into a backward-arching aerial maneuverer that simultaneously knocked off Mr. Scheeler’s aviator sunglasses while reallocating the prodigious streak of zinc oxide from his bulbous nose onto a good portion of my pal’s back and abdominal region. As Sparky hit the ground running he resembled a Dachshund/skunk hybrid from Hell with a hat in its mouth. The surprised man managed to let out something between a gasp, grunt and scream before surrendering to gravity and falling backward. All semblance of order was thereby shattered as the dozen or so new recruits seized upon the frenzied atmosphere to begin howling and wrestling and what not. Don’t get me started. But not Sally—she couldn’t take her eyes off Sparky.