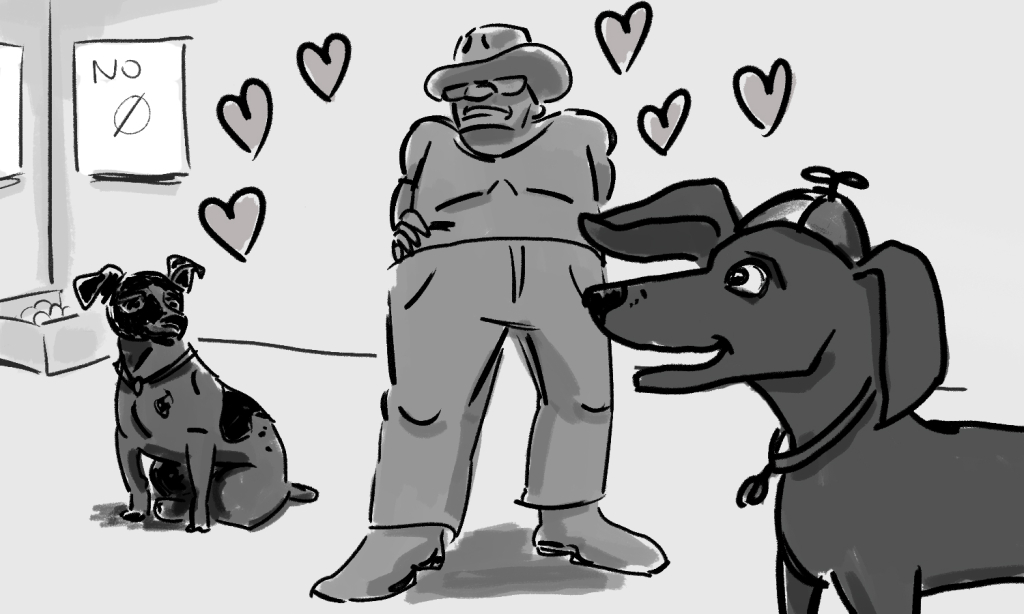 It was no secret that Mr. Sheeler—who always wore a full brim hat, polarized shades and a thick layer of zinc oxide on his nose—didn’t like dogs. He said as much to new recruits on the first session of his six week course: “Let’s get one thing straight, I don’t like dogs.” Don’t get me started. But what Sheeler lacked in pleasantries he made up for in results. Statistically, a little less than half of his pupils made it to graduation, most folded under the pressure and perfect attendance was mandatory.  But those who did were truly transformed. Even the most hyperactive, undisciplined and socially awkward puppies came out of Scheeler’s program fully potty-trained, responsive to wide range of commands, capable of at least one amusing trick and generally great around other animals including babies. Never, however, had Lake View Terrace’s strictest canine disciplinarian been tasked with the rehabilitation of the only two dogs in town with a police record.  The first, of course, was my pal Sparky. No small effort on the part of Mr. and Mrs. Baxter had succeeded in persuading the local judge to drop the attempted shoplifting charge, but the old-schooler took a hardline stance on the public intoxication portion of the report.  “We must send a strong message to the canine community,” the judge had said, “that such drunkenness will not be tolerated.” The statement was made on the heels of another unfortunate incident involving a Jack Russell named Sally—also entrusted to Mr. Scheeler’s Academy that semester—and alcohol.  It turns out that a few weeks prior to enrollment, Sally had been grocery shopping with her owner when a premium bottle of Chardonnay happened to fall from the top shelf of the liquor aisle. Newsflash puppies: These things happen. Sally, with all the speed and intensity the breed is known for, had managed to consume most of the otherwise wasted liquid well before a mop and bucket could be mobilized. One thing led to another and Sally, admittedly not herself at that point, had led customers and shop attendants on a free-spirited chase that reached its destructive pinnacle in the dairy aisle before culminating, once and for all, in the seafood section.  Don’t get me started. For whatever reason, when Sparky met Sally on the first day of classes they fell madly and hopelessly in love.