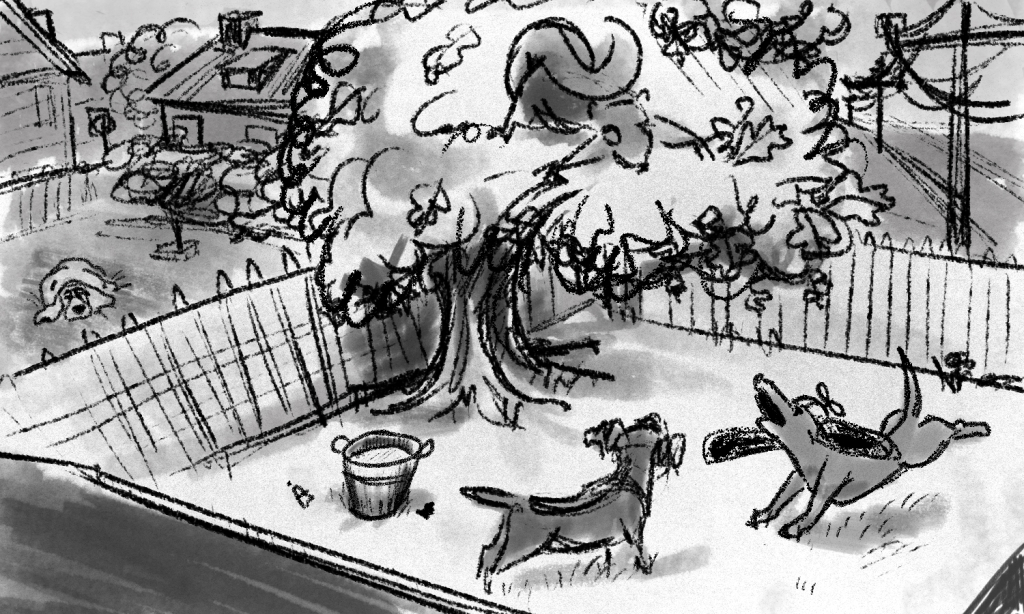 And that was a crisis that needed to be handled even more delicately than usual because, on that particular day, Mrs. Baxter had a headache. For reasons known only to Mrs. Baxter whenever she had a headache Sparky wasn’t allowed inside. The coincidence never bothered my pal in the least. Back then dogs liked being outside. Don’t get me started. Turns out Sparky had been doing some backyard reconnaissance when, out of nowhere, a squirrel the size of an Irish wolfhound’s head “accidentally” dropped an acorn into our humble-but-adequate water bucket. It was the kerplunk that alerted Sparky to the intrusion, and his justifiable reaction that alerted me. All hell broke loose which, news flash puppies, is the way hell usually breaks. Don’t get me started. I did my best to assure Mrs. Baxter that there was nothing to worry about—that between the two of us, Sparky and I, the rodent would have better luck establishing permanent residence in hell itself—but the poor woman was inconsolable and got, in my opinion, uncharacteristically liberal with her jar of aspirin. It goes without saying that what happened next was entirely the rodent’s fault. Sparky and I formed a perimeter around the mighty oak and began simultaneously lamenting our physical limitations while sending a commanding message to the squirrel. It was a well-coordinated effort that took hours. That’s how we did things back then. Don’t get me started. Eventually, sometime around sunset, the squirrel had no choice but to realize our commitment to justice and (in a manner that I still to this day find irritating) hopped from one branch to another, to a telephone wire, to another tree that happened to rest in our good neighbor Vern’s backyard. Vern (God rest his soul) was the oldest and wisest bloodhound in Lake View Terrace. No longer known for his physical agility, optimism or tolerance of foreigners, he psychologically engaged the squirrel with one of his trademark everything-is-futile stares. In a fraction of the time it had taken Sparky and I to get our point across, Vern had rendered that squirrel so affected by his compelling brand of non-specific-hopelessness that, while retreating, it subconsciously or otherwise mistook the high-voltage wire between our two properties for a survivable means of egress. Sparks flew. Lessons were learned. Which reminds me of the time Mrs. Baxter explained that she was going to have some very important guests over for dinner and asked me to “please, for God’s sake please, do whatever you can to make sure Sparky doesn’t ruin everything.”