Badgers and the Power of Suggestion 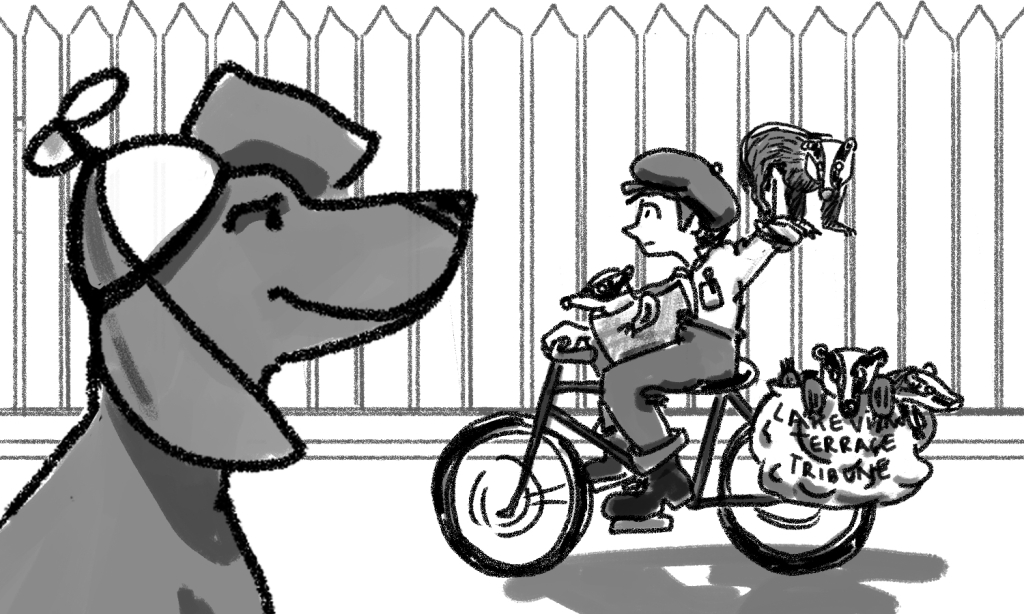 Unfortunate consequences aside, Sparky’s attempt to unleash his inner wolf had technically succeeded. Even Vern said that the collateral damage (automotive collision, power outage, requisitioned pizzas) was “remarkably consistent with what one might expect from a top predator engaged in a hunt on the civilized streets of Lake View Terrace.” But Mrs. Baxter had had it and there was now troubling talk of her shipping my pal off to a farm. Newsflash puppies: farms are euphemisms. Despite what you may have heard, hyperactive canines are rarely if ever actually reassigned to a life of agriculture. Don’t get me started. Let’s just say talk of open fields, dusty trails and lazy sheep has a strange way of turning into a one-way trip to the concrete confines of a municipal facility. That’s right little Einsteins, I’m talking about the pound. Needless to say, in an effort to prevent Sparky from being sent away I had to come up with a way to trick my pal into behaving exceptionally well until things cooled down. That got me thinking. Everybody knows Dachshunds were bred to snuff out badgers. It stood to reason, I figured, that the lack of any actual badgers in our particular suburb might be heavily contributing to what Mrs. Baxter described as Sparky’s “inability to be anything but restless all of the time.” This made sense. Squirrels, birds, tacos that weren’t his—all stand-ins for the elusive badgers my pal felt wired to capture. So then the question became: How could I constructively channel this natural inclination? Somewhat arbitrarily, I decided to start by suggesting to Sparky that the morning newspaper wasn’t really a newspaper at all; that it was in fact a subspecies of badger—one that needed capturing and prompt delivery to the foot of Mrs. Baxter’s bed, first thing every morning, no matter how great the challenge, etc. Sure enough, the following morning my pal caught the paper in his mouth before it hit the driveway and took it to Mrs. Baxter personally. Of course she was thrilled and forgot all about sending him to the rural ever after. However, word got around the neighborhood and it soon became a well-known fact that Sparky would efficiently obtain anything as long as (instead of calling the thing by its proper name) you told him it was a badger of some kind or another. Don’t get me started. Which reminds me of the time the suspicious teenager at the end of our block told Sparky that he didn’t have any money but needed a case of “beer badgers” from Mr. Mevel’s convenience store.