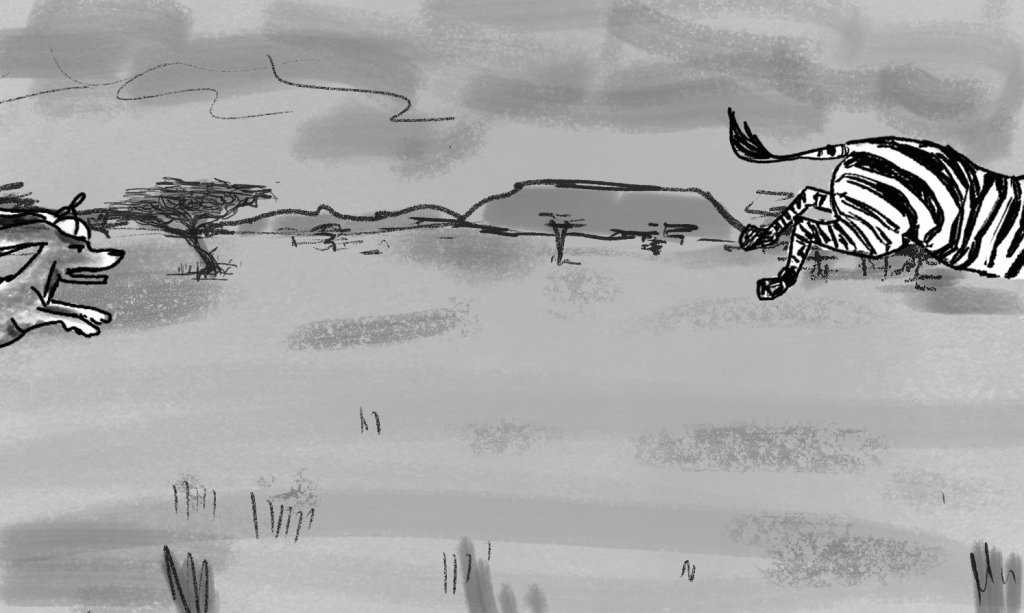 It was all a big misunderstanding. When Vern told Sparky and I about wolves—about how they’re the sole ancestors of modern dogs like us and that therefore every dog has an inner-wolf—he was, of course, speaking figuratively about the fragility of domestication and whatnot. But Sparky became convinced that if he got hungry enough and tried really hard he would (according to Vern) magically unleash the skilled hunter and apex predator he’d always known was inside of him. Don’t get me started. Consequences aside, what happened next was a remarkable display of grit, determination and courage. That’s how we did things back then. Sparky avoided breakfast by staying in the backyard. Instead of eating he practiced lunging fiercely at imaginary ungulates. Mrs. Baxter, surprised that my pal hadn’t charged inside fifteen minutes early to begin reminding everybody that it was almost time for breakfast, didn’t panic right away. But when 11:00 rolled around and Sparky still hadn’t touched his bowl she purposely placed some of Mr. Baxter’s leftover tacos on the edge of the counter and pretended they were unattended in hopes Sparky would do what he usually did. But he didn’t. Don’t get me started. Low blood sugar can happen to anybody and by lunchtime Sparky had completely lost it. He’d become inflexibly certain that only the still-warm flesh of a zebra and/or moose could satisfy his now heightened demand for wild protein. Of course no one could have predicted that on that particular day the electric company would be performing maintenance on the neighborhood’s power lines. Nor could anyone have predicted that the company’s hardworking men and women would pause in front of the telephone pole across the street from the Baxter house and order two large pizzas from Fratellis for lunch. I suppose it also goes without saying that nobody could have anticipated that Sparky—in a delirious fit of self-inflicted hunger, smelling the aforementioned pizzas from two blocks away—would wriggle through the hole in the fence, dash head-on into the street and cause the pizza delivery man, Mr. Fratelli, to swerve and crash, at tremendous expense to his automobile insurance provider, into the whole high-voltage operation. Don’t get me started. The first thing Mr. Fratelli did was make sure Sparky was okay. The first thing Sparky did was climb into the backseat of Mr. Fratelli’s car and eat every last slice of pizza including some of the bag that kept them hot. In the end, nobody got seriously hurt and the neighborhood’s lights came back on the following morning. Which reminds me of the time Mrs. Baxter told me that, even though she loved him very very much, Sparky might have to go live on a farm.