On Tuesday I called in sick to work.  I wasn’t sick in the “cough-cough” sense of the word, it was…well, 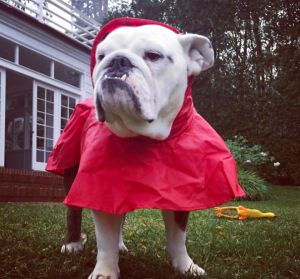 how can I put this… it was raining outside.  Since moving to Los Angeles four years ago as a sprite young pup of nine weeks, the weather has varied very little from a temperate and acceptable “sunny and 73.” So on Tuesday when my boss called asking why I wasn’t at my desk in my sofa chair, I replied, “it’s raining.” Oddly he didn’t seem to care that the streets were wet and liquid was pouring from the sky.  Perhaps the fact that he’s a Portuguese Water Dog makes him less sensitive to soggy paws and a damp belly.  From underneath the 600 thread count sheets I listened to him bark about a deadline and my job on the line, but at some point in the conversation I began to doze off.

A few hours later I woke up and looked out my bedroom window at the gloomy grey sky, then I looked at my phone and say eight missed calls from the office, then I turned over and dove right into my next nap. 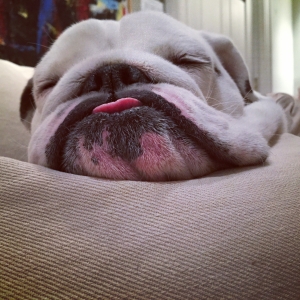 I dreamed of sunshine, brighter days, and new garden hoses for my yard.  Somewhere between me getting hired to tend the Getty Gardens and learning to fly, I was startled by a knock on my door.  Reluctantly I answered.  It was Donald the Doodle from across the hall.  His golden coat was dripping wet and he had a concerned expression on his face.  I yawned.  I stretched.  I blinked several times before  my gaze focused properly and then I said, “Hey Brah, What’s up?”

Donald was sent over by our boss to get me out of bed.  He was told to do whatever it takes and in his mouth he had a peanut butter and peanut butter sandwich on french bread.  Lucky for me his new year’s resolution was to go gluten free.  I sauntered over and thanked Donnie for his kind gesture.  In two bites the sandwich was gone and I turned around, saw that it was still pouring out, and waddled right back under the covers mumbling something about telling my boss he’d have his story on Thursday.

Next thing I knew it was Wednesday morning.