I fired Jose the gardener last Friday. It wasn’t an easy call. Ultimately, letting him go means more work for me and my company: Bogie Green Paws. But after three years of constant miscommunication and some unfortunate boundary issues regarding my garden hoses, it was time. So when mom told me he was retiring and moving back to Mexico, I seized the opportunity to let him know he was D.O.N.E. He took the news surprisingly well.

When 5:00 rolled around—in these parts we call it quittin’ time—I called Meaty and Rupert to come over for some H20 straight out of the tap. There was cause for 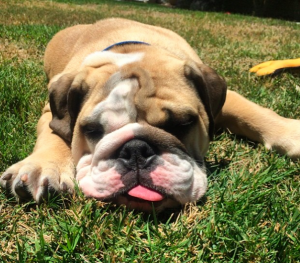 celebration and I was sure they’d be as excited as I was to have free range of the estate. No Jose meant we could finally implement our own landscaping skills which, without putting too fine a point on it, are outstanding and incredible. Need a hole? No problem. Wish those flowers didn’t exist anymore? You got it.

I was filling up my blue kiddy pool when the boss rang. I don’t know why I answered, but I did. Turned out there was a military officer, high ranking, who was on his way home after a two-week secret op. Op is short for operation but you didn’t hear it from me. Anyway, I needed to get to him before TMZ leaked the story. Time was of the essence.

Meaty and Rupert barged in as soon as I’d hung up. They had a six-pack of Evian and were looking to have a good time. I told them to make themselves at home but that duty called. One minute later I was upstairs packing my duffle. My instructions were to head to Orange County during rush-hour on a Friday. Not cool. I grumbled that it would be faster to fly to San Francisco as I tossed my board shorts and white v-neck into the bag. I pulled my baseball hat over my ears as I searched under my bed for my note pad and Rainbow Sandals. I flew downstairs, grabbed two freshly sharpened pencils from my study, waved goodbye to my buddies who were already making good use of the pool and typed “Eat Chow” into my Waze App.

Traffic was stop and go and the drive took me one hour and 12 minutes. I pulled up to the restaurant and looked down at my watch: 7:14pm. I was right on time. The friendly hostess ushered me in the cozy little café to a table in the back where Admiral was lounging. Considering his name and occupation, he looked super chill. The

smell of Sloppy Joes and grilled cheeses floated through the room as I hopped up onto a chair.

Bogie: Wow, my distant uncle is in the military but we’ve never met.  It’s an honor and a pleasure to meet you Admiral.  But what’s your real name?

Admiral: Thanks Boges! Wait, may I call you Boges? Officially, my name is “Admiral Bernard Mortimer Kurthy”. I know, I know, the parents got a little wordy with that one, but they really only call me “Admiral”, unless I eat one of mom’s shoes, then I get the full monty.

Bogie: For the past few weeks you’ve been on a top-secret undercover operation.  I know you probably can’t divulge too much, but I’m super curious as to what went down.  Didn’t you have to sleep away from home all by yourself?  That sounds crazy exciting and nerve wracking all at once.

Admiral: Well, when you’re of my rank and stature, you have to just take things in stride, my man. My parents went and got hitched, so I decided to embark on a two-week undercover mission at the local jail—doggy boot camp, if you will. The first day I just sniffed around, getting the lay of the land while making my presence known. By day two, true to form, I was running the place; hoarding treats and taking names. It was child’s play really and I was actually a little sad to leave my fellow inmates behind! That’s all I can say for now before my debrief.

Bogie: Sounds intense bro. I know very little about your life other than you live in Orange County, California.  What does a typical workday look like for you?

Admiral: Well Boges, I’m not really into routines. Variety is the spice of life. That’s a saying, right? I like to mix things up a bit day to day, so I’d say there isn’t really a 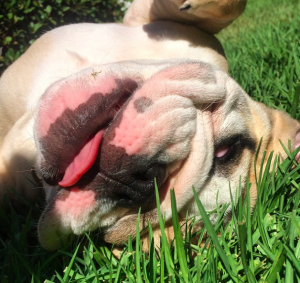 “typical” day for me. Sometimes I need a three hour nap after breakfast because I trotted just a smidge too quickly to my bowl, other days I prefer some light bunny watching in the yard. I might chomp on some flip flops in the afternoon in between #pullingechunky and #pullingachunky – you never know. I try to keep things light at home and save the real work for day camp where I’m known as The Torpedo. Just think of a bowling ball moving quickly and landing a strike to the pins.  I’m the bowling ball.

Bogie: Did I tell you about the day I went to day care and got kicked out an hour later for “body slamming” my buddies?  Anyway you seem like a family dude.  Do you have any siblings?  Human or other?  And are your parents well trained?

Admiral: No, I’m an only child and I prefer it that way. I’m a one man show but I do have a fabulously studly half brother. I think you’ve met him…his name is Chunky Monkey! As for my parents, well, it’s rather embarrassing but they’re still a work in progress! I’m not giving up though, I’ve got a couple of gnawed on pamphlets for seminars that I’m planning on sending them to (on their dime, obviously).

Bogie: Tell Big Monkey I said ‘sup! In the world of cyber-dating and bullymatch.com it seems like finding a girlfriend for a dude like you would be a sinch without even leaving the confines of your cozy bed.  True or false?  Do you have a special lady in your life?

Admiral: True! I do have a lady, she’s quite a spitfire actually, you may have heard of her as well, Holly Woods? I think she actually enjoys getting into trouble more than I do.  Did you know that she set up a kissing booth while I was on my super secret undercover mission?! A kissing booth!! What. The. Woof. True story. 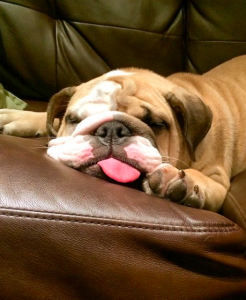 Bogie: Classic Holly.  I won’t tell you what happened the time I flew to Martha’s Vineyard to interview her last winter.  Thank Dog summer is just around the corner and the weather is warming up.  What would a dream sunny Saturday involve for you?

Admiral: Certainly not running through the sprinklers if you know what I mean! Sorry, a little California drought humor there for you. Let’s see here, a dreamy Saturday… Probably a little sunbathing in the backyard on my favorite patch of crunchy grass with my mom fanning me, alternating between quick sprays of Evian and bites of cold watermelon balls.

Bogie: Solid answer! My boss says you have a date at 9:30pm at that ice cream shop down the street so we should probably just wrap things up with a lightening round.  You down?

Bogie: Sweet.  Tongue in or tongue out?

Admiral: Tongue out, always tongue out! Have you met me?

Bogie: Coca Cola or milk? (you’re too young to drink)

Admiral: #pullingachunky! Sorry man, I haven’t mastered your aerodynamics yet. 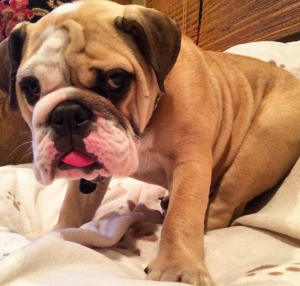