The only thing worse than the dermatologist is the dentist. Trust me. I speak from experience. Last week, while I was being told my paws are allergic to grass, my phone started ringing. Happy not to listen to anymore of that nonsense about grass, I answered without realizing it was my boss. I politely excused myself and waddled out 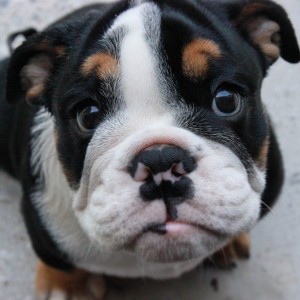 into the waiting room, leaving my mom with the doctor. She’s used to it.

Ever since I interviewed @brimleycat, my boss has been on this kick of trying to get me to interview other species. It’s not that I’m opposed to the idea, it’s just that I have my limits. For example, I had to put my paws down when he told me Daisy, a lonely hedgehog who’d joined an online dating site in a search of hugs. Not gonna happen. Needless to say, I was a little apprehensive to hear about my next assignment.

I became rapidly more suspicious when he started asking if I was any good with lullabies and bedtime stories. Baby stuff! My mind began to race and I started thinking of various exit strategies to get me out of the job. Could I pull the grass allergy card? Could the bedtime story be a BBQ cookbook? If so, I knew my buddy Meaty would be up for the task. And my man Rupert is a musician, so I’m sure he could serenade the subject to sleep…

“You’ll be meeting at the Mac N Cheese Festival tomorrow in Toronto, Canada. Bring a hat because it’s sunny over there.”

The aforementioned trepidations vanished almost instantly and I was drooling with anticipation. My mom picked up my vet bill and we headed home. I was still drooling when I loaded my duffle with the basics: a bandana, some zinc for my nose, my notepad, three freshly sharpened pencils, a copy of Good Night Moon and a box of wet wipes. Grilled cheese can be messy.

My mom packed me a lunchbox for the flight with my favorite peanut butter and peanut butter sandwich. She snuck in some carrots to be healthy and then I was off. On the flight I snoozed and researched how to get along well with infants. I was interviewing a puppy for the first time ever and needed some advice.

When I landed there were two big bullies waiting in the baggage claim holding a sign with BOGIE scribbled on it in red marker. One was brindle like me and the other 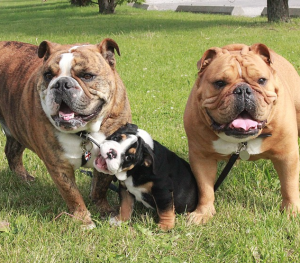 was an unusual ginger color with just a bit of white on his chest—both looked super tough and cool. They spotted me in the crowd and helped me with my duffle. It quickly became apparent that these two dudes were Mackie and Big Nog, the older brothers of Tommy the young pup I was there to interview. We were lifted into the back of a pickup truck that was headed straight for the Mac N Cheese fest. I looked down at my watch with worry. We were ten minutes behind schedule. But Mackie told me not to worry, puppies aren’t exactly known for being punctual.

When we pulled up Tommy was literally bouncing up and down with excitement. I needed a nap just looking at him but, with scents of liquid cheese lingering in the air, I got my second wind and decided to go for it. Journalistically, interviewing this little fella was the chance of a lifetime and…well…he was pretty stinkin’ cute.

Bogie: Tommy, I appreciate you taking the time out of your incredibly busy schedule to meet with me. I realize sitting still isn’t yet a strongpoint of yours. Don’t worry, you’re still young… you’ll get there. Speaking of age, how old are you?

Bogie: Oh geez. Are you even legal? Never mind. I can tell by your accent you’ve got some Canadian in ya. Are you full? And from whereabouts?

Tommy: I’m from America. I flew here in a plane all by myself! Maybe the accent is because I’m a quick learner though. I copy everything that Mackie does. 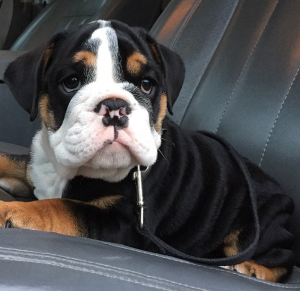 Bogie: Life with two big brothers can be ruff sometimes. I mean Mackie and Big Nog are like five times your size. Who is the boss of the family?

Tommy: Mackie thinks he is for sure but I’m working on it!

Bogie: Good luck little buddy. Life as a puppy has its ups and downs.  Sure you’re the center of the universe when you’re out for a stroll, but then when you’re home it’s tough to know what’s edible and what’s not unless you at least try a little bit of everything. What has been your most favorite chewable object to date?

Tommy: First it was Mom’s flip flops but Dad brought out his LV sneakers the other day and I just had to get a taste even though I knew I’d get in trouble. Mom stopped me but I still eye them and remember how close I got. I’ll keep trying!

Bogie: #nevergiveup. It’s been years since I was about your size, but if I remember correctly I was carried a lot—like everywhere in public for my first few weeks in Los Angeles. Being up high in my parent’s arms gave me a new perspective on the world. It also led to many strangers saying “I can’t even” and “I’m dying” when they saw me.  Has the same thing happened to you?  Or is that just some weird thing LA people do?

Tommy: You mean it’s going to stop? Actually I notice sometimes people just walk by me and I don’t understand why they don’t stop to say hello or give me tummy 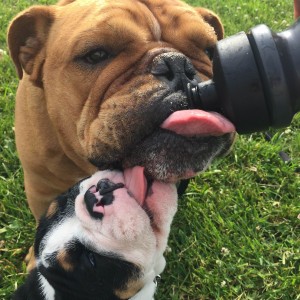 rubs. I will snuggle or roll over for anyone! But I think it’s my ugly two big brothers. They’re embarrassing and can get all loud breathing and drooly when we are out. And if they do stop Mackie wants their attention too even though I know they’re stopping for me!

Bogie: Watch it with the “ugly” bud! If you were to sum up your day in a few short sentences (or words) what would it look like?

Tommy: My goal in life these days is just to nibble on Mackie’s big ears and Big Nog’s big jowls and eventually get to those LV sneakers!

Bogie: Solid ambitions all around. Without creating any sort of weird pressure for you little buddy, do you have any aspirations for this year ahead?

Tommy: Maybe to get to eat Big Nog’s food? His food is way more gourmet than mine—I know because I’ve tasted leftover bits on his jowls before.

Bogie: I realize this is the longest you’ve stayed relatively slow…EVER…so let’s wrap things up with a quick lightening round, shall we?

Tommy: I don’t know what that means, but OK.

Tommy: Puppy kibble but I’ll try anything once.

Tommy: What are pee pads?

Bogie: Dude, ever heard of hockey? Maybe you’re too young. How about Thomas or Tom? 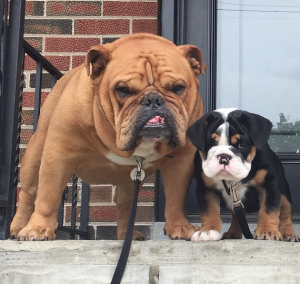 Tommy: My humans are mean and don’t even let me in their room! What should I do to fix this?

Bogie: Have you heard of my self-help book on Human Training 101? Ask Big Nog to read it to you. Tommy Lee Jones or Thomas Edison?

About the Author: Tommy