A Road Dog Gets Real in Rock N Roll Socks 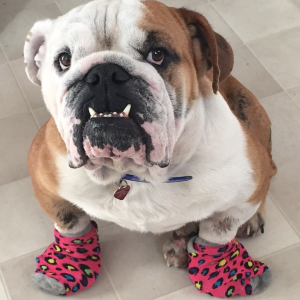 My boss has been on me about taking “business casual” a little too far.  When I go into the office naked he says it’s both inappropriate and distracting.  I always remind him that it’s nearly impossible for me to buy anything other than made-to-measure so unless he starts giving me a better salary, he’s stuck seeing me in the buff.

Last Friday the company had a Casual Friday cocktail party and I showed up in my usual: nothing.  When I saw my boss speaking with Pomeranians from HR, I knew it was about my attire, or lack there of.  As the creative team was lapping up water on the rocks, I decided to take a nap in the middle of the restaurant.  A cold concrete floor on a hot summer day can feel like a dream.  About thirty minutes after dozing off I smelled my boss approaching and decided to remain perfectly still.  Perhaps he’d leave me alone if he thought I was napping?  I gave him way too much credit.  He barked my name and told me to get up!  “News never sleeps” is his go-to line when he knows he’s about to make me work on the weekend.

I opened my eyes and let out a sigh that made my jowls lightly flap around.  He knew I was ticked but continued on anyway.  There was a crew of bullies and the like based locally that I needed to get in touch with.  They go by the name of Road Dogs and there was one dude in particular I needed to get to know.  My boss wouldn’t say why, but when mentioned the whereabouts of our meeting, I knew ulterior motives were involved.

Road Dogs sounded like the name of a killer band.  When I got home I hopped up on my sofa I’m not allowed to be on and fell asleep hoping this gang of ladies and 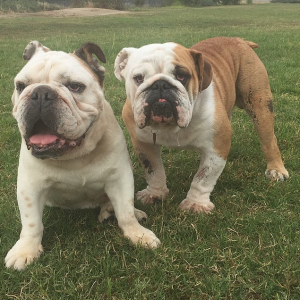 gents was as cool as they sounded.

My alarm went off at 9:25 am and I hit snooze six times.  Just as I was about to hit it a seventh my mom came in a pulled the covers off from over my head.  She handed me my bison and kale smoothie and my day duffle full of nothing put three sharpened pencils and my notepad.  It was nearly 10am – I had to jet.

I slurped up my smoothie as I put on my favorite red collar and nothing else.  Just because we were meeting up on Melrose Avenue at the famous Sportie LA Sneaker shop, I wasn’t going to be persuaded to dress any differently.  Nothing or nobully was going to get me to wear jeggings, shoes, or hoodies – no matter what!

As I pulled up curbside, I asked my mom for the time.  It was 11 on the nose.  Perfect.  There leaning up against the door of Sportie LA was a good looking tan and white bulldog.  He introduced himself as Fletcher.  I looked down and saw he was wearing a rad pair of booties.  That was it.  Suddenly I began to think…maybe socks and shoes aren’t so bad after all?

Bogie: Fletcher, it’s a pleasure. I already feel like I’ve known you forever.  When did you become a part of the Road Dogs family?

Fletcher: I was rescued in March. I was advertised on Craigslist and described as having a ‘mild case of mange in my paws’.  You couldn’t really see them in the original 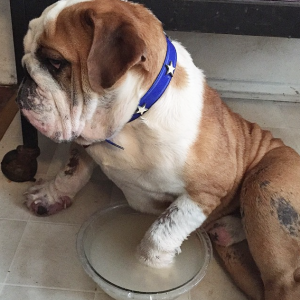 photo.  Nancy, a friend of my rescue mom, Nikki Carvey, went to get me for her and saw how bad they really were.   My previous owner said I just ‘lay around’ a lot, but my paws were so swollen I couldn’t walk. I cost $200.

Bogie: It makes me both angry and sad to know about the awful condition you were in, but luckily fell into the right hands.  You’re definitely not an only rescue pup, Road Dogs always seems to be busy saving the lives of bullies and their buddies.  How many brothers and sisters are do you have to share stuff with these days?

Fletcher: There are about five others around and I love them all. I don’t mind sharing!

Bogie: Your paws were in serious condition when you first came to Road Dogs and while they aren’t 100% yet, they are surely on the mend.  What is your pedicure routine to help heal your feet?

Fletcher: I am on meds for my mange, and have daily foot soaks in the bathtub of Chlorahexadine or Iodine.  I really don’t enjoy them but my paws are a lot better.  I also have Nu Stock rubbed into them at night and wear my sexy socks.

Bogie: Not everybully knows this, but I have a minor case of hot spots in my front paws.  This means daily soaks in my kiddy pool and antibiotics from time to time.  My mom (and boss!) has been trying to get me to rock some socks or booties, but I won’t have it.  I always tell her they won’t look 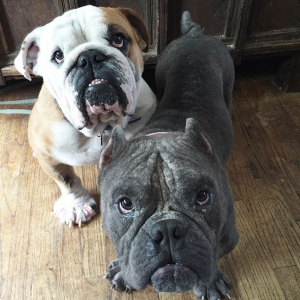 nearly as cool on me as they do on you.  Do you have a favorite pair of socks?

Fletcher: My Sex Pistols socks.  I haven’t shown them off yet but I’m sure you’ll like them too!

Bogie: Bad to the bone! Is there another Road Dog who you’d consider a best bud?

Fletcher: Me, Roseberry the Frenchie pup and Haiku the Japanese Chin pup are pretty tight.  They’re fun to play with but much smaller than me so I have to be careful not to sit on them.

Bogie: If dreams were to come true and you could spend the next 24 hours doing anything you want, what would you do?

Fletcher: Chew a fresh marrow bone, play with my friends – and sleep.

Bogie: Road Dogs is a rescue organization run solely on donations from the public along with hard work and love from Nikki.  Do you know how she first came rescue pups in need?

Fletcher: She started over 10 years go, volunteering for an organization called Ace of Hearts.  They rescue a lot of American Bulldogs and she had a Pit Bull and an American Bulldog at the time.  When her Pit Bull named Vinny died, she rescued English Bulldog Huxley, and he made her laugh, so she kept him.   I really like Huxley but he 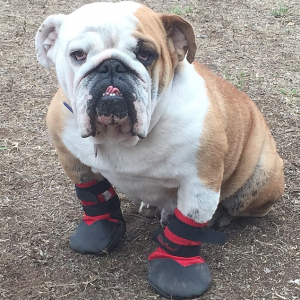 can be a bit of a grumpy old man!

Bogie: Where do you see yourself in the next five years?

Fletcher: In a fantastic home, being loved.

Bogie: Have another minute for a lightening round before you go shopping for some new treads?

Fletcher: Sleeping on the sofa. 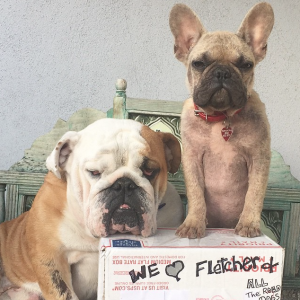 Fletcher: Sleeping on the sofa.

Fletcher: I’ve never been to San Diego but would be nice to visit.

Fletcher: Both.  And lunch too!

Fletcher: Both. I enjoy hanging out on the couch, but you won’t find me in the kitchen at parties unless that’s where all the people are! I love attention! 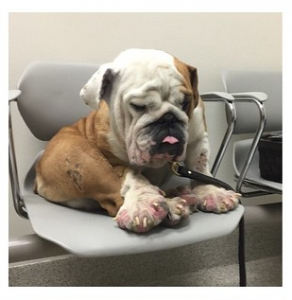 Bogie: The indoor sofa or the outdoor dog bed?

Fletcher: Neither. I was named after Dexter Fletcher – a British actor Nikki remembered from England. She always thought he had a cool name. I think it’s pretty cool, too!

Bogie: Fletch!  It’s been so super cool to meet up with you.  I wish you the best in eventually finding your furever home.  Now, do you think I’m more of a red shoe guy like you or blue?