Last Friday, the office was crazy because the boss had pushed up our deadlines to allow everyone time to get ready for The Droolitzer’s annual HOWLoween party. I 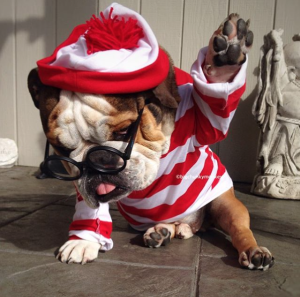 had sent my story in earlier that morning, not because I’m an amazing journalist but because it was a terrible piece and I knew there was no way I could make it any better. I was supposed to interview a cat named Bob about his transition from feral to domesticated, but he’d cancelled a few minutes before our meeting claiming he was allergic to bulldogs.  Like I said, it had been one woof of a week but I’d figured if my story couldn’t be good at least it could be early.

Polly the Pomeranian stuck her head in my cubicle and asked me what I was going to be for the costume party.  Since I had absolutely no idea, I responded, “It’s a surprise.” She didn’t like my answer, but couldn’t resist telling me she was going to be a POMpkin spiced latte from Starbucks. I thought about saying, “decaf, I hope,” but went with, “Wow Polly, you’re really going ALL out.” She squealed something in her high-pitched voice about how “of course she was because this was THE party of the year.”  If I could sweat, I would have started right then and there.

It was nearly two hours before “THE party of the year” and I still had no idea what I was going to dress up as.  I called Gary the Greyhound on the office line hoping he’d have some encouraging words. He was older and not into the glitz and glam of the social scene. “Hey Gary, you’re not dressing up for tonight’s event are you?” I asked. It was a leading question, but I need somebody to share my lack of enthusiasm.

“Sure am Boges!” he said, “I’m going as—get this—The Greyhound Bus!! Like it?  Isn’t it good?  What are you going as?” His voice was so upbeat that I didn’t have the heart to let him down. I said his idea was topnotch and that mine would be too, but that I was still trying to decide between tons of similarly creative options.  “Can’t wait to see you there my man!” he said before hanging up.  I slouched lower in my chair and Googled “minimalist costumes that don’t require head, paw or face gear.”   Unfortunately nothing came up.

To be honest, the problem is that I’m not just into wearing clothes. Sure I can tolerate a shirt here and a hoodie there, but the second something touches my head, face or paws—I’m over it.  Day to day this is not a big deal, but come holiday time I’m almost always at a loss for what to wear.  My best mate Sumo is the king of clothes.  Last year he was a hippie, a dinosaur, Buzz Lightyear and Elsa from Frozen! Meanwhile all I could think of was being Robert, my rubber chicken chew toy.

Everyone in the office started to file out at 4pm.  “See you in a bit Boges!” said Jack the Jack Russell who’d already told me he was going as a jack-in-the-box.

I grabbed my duffle and headed out to the curb where my mom was waiting for me.  She could tell I was down and asked me what was up.  “I’m not going to the HOWLoween party!” I blurted out, surprising even myself.  “Dexter is going as Darth Vader, Donald the Dachshund is going as Dognald Trump and Chunks is going as the Pope—but I have nothing to wear and can’t show up to the company party in that hotdog costume you bought for me two years ago.  It doesn’t even fit.”

Moms, who have a way of calming us down, told me to take a deep breath. Turns out she’d been thinking a lot about the event and had narrowed it down to a few options based on my general dislike for clothes.

When we got home I dropped my duffle on my bed and went into the kitchen for a snack. On the dining room table were a few of the options my mom had been considering.  There was a sandwich board cut into the shape of a piece of toast with “peanut butter” smeared all over it, a white pillowcase with a hole big enough for my head and, lastly, a green t-shirt

with a frog on the front of it. As I was debating whether or not to go as a peanut butter sandwich, I looked down at my watch—it was nearly 5pm and I had to scoot.  I grabbed the green shirt and headed to the park across the street from the office.  When I was less than a block away, I slipped the frog shirt over my head.  Sure it wasn’t the most intricate of costumes, but it was just perfect for me.

I waddled up to my buddy Deeks who was dressed as a lion. He had a puzzled look on his face and asked, “What are you supposed to be Boges?”

“A bullfrog of course!”